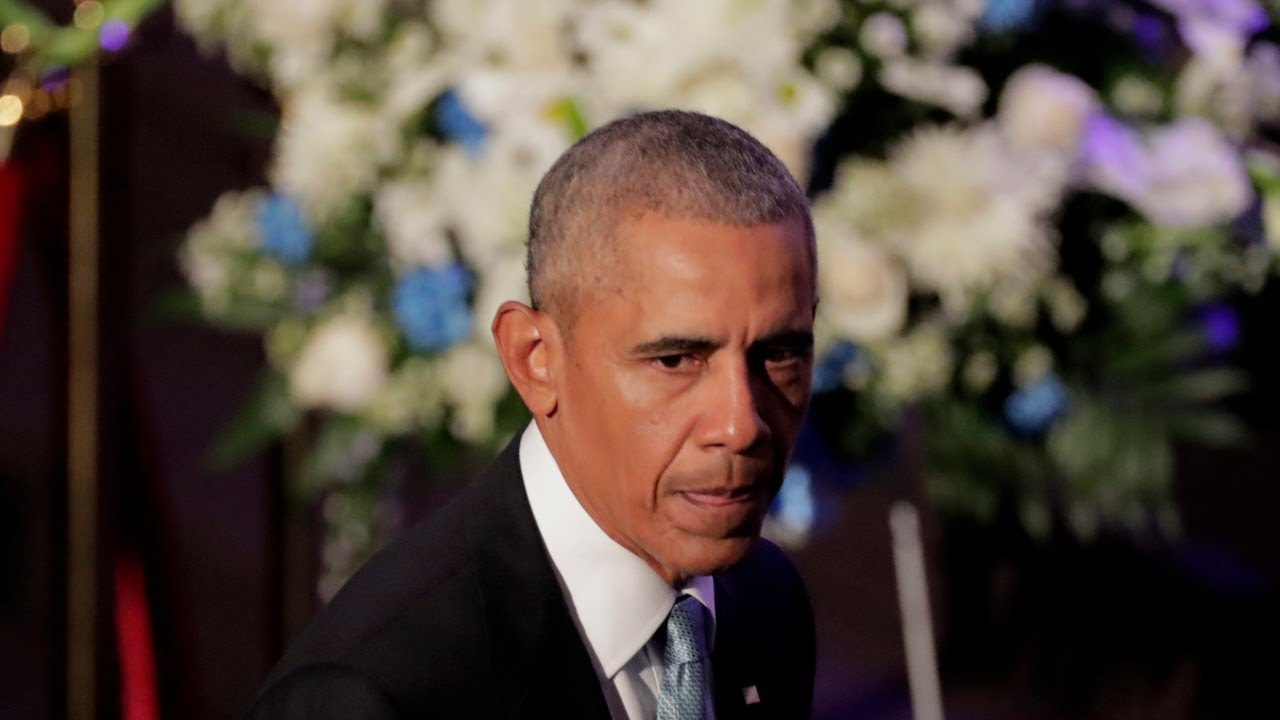 The Democrats lost the election, and they were told to pack up.  Joe Biden and others got angry, and began a campaign to derail the incoming Trump administration by pulling the rug from out under Gen Flynn.  His job involved liasing with foreign leaders, which was portrayed by Biden as a violation of the Logan Act.  This was fed to the press as a reality, in the same way P. Trump was supposedly involved in a quid pro quo with the Ukraine.

Biden's behavior was unpatriotic, and deceptive.  This is to say nothing of his influence peddling in the Ukraine which was about to change- you know that is what really pissed him off.  He engaged in a campaign to fowl up P Trump's foreign policy by improperly eavesdropping on Gen Flynn.

He ought to be asked about this.  He did not respect our nation, and did not assist is making the transition smooth.  Rather he attempted to derail the incoming administration, placing himself above our nation's interests.

Posted by Stoic Person at 5:56 PM No comments:

Ding Dong Now that the G is dead, time for a change?

Boredom got you down ladies?  Would you rather have fewer children and endometriosis and live the exciting life?

This was the approach used on women by financiers.  Many women joined the workforce, and then it was declared nonviable, and noncompetitive.  Men were coaxed into becoming gay as a solution, wages became stagnant, and most jobs became $10/hr.  We were told our fertility was flagging.

With the advent of home schooling and now C19-imposed online classes, we are reconsidering, resetting.  What is it we want?  A continuation of the same old thing?  Leave the schooling of your child up to Disney, drag queens and common core?

In deciding to curb Christianity and population growth, did anyone consider the non-viability of the economy they created back in the early days of the woman's revolution?  What could go wrong if we placed a little more emphasis on women caring for their children, if we scale back women's participation in the public sector?  We might increase our fertility.  Job 1 of our society is teaching our children good values.  That would improve.  Earnings for bread-winners and women might improve somewhat.  Productivity might increase.  Homosexuality might decrease some.  There would be more jobs for men.  There might also be a deflation in property values.

When you see 14 year old boys kicking in the heads of adults in our cities, could teaching our children better values be possibly important?  Could there be something wrong with the frist world having a positive population growth?  We have to consider the future for our culture and children.

Posted by Stoic Person at 5:26 AM No comments:

Ruth Ginsburg was nominated to the high court by Bill Clinton.  She was not a great justice as some are saying.  In fact she was one of the worst.  she should have never been approved because of her radical views on sex.  She rode the wave of the surge for the equal rights amendment, which she interpreted as making the law colorblind wrt sex.  Her views were so radical the ERA was rejected, even though many believed a statement expressly saying women should not be discriminated against, was appropriate.

She was raised to the DC circuit court by Jimmy Carter, based on the 1977 document "Sex Bias in the US Code".  but who actually read this radical feminist document?  It addressed bias, but also eliminated sexual distinctions.  She might have advocated for example, men and women use the same bathrooms.  Everything was unisex in her viewpoint.  So she advocated men and women should occupy the same prisons and reformatories, and women should be able to do whatever they please with their bodies and in any roles they choose, including lesbian relationships and prostitution.  She also advocated women for combat.  She advocated sex integration for girl scouts and boy scouts.   She called for the elimination of Mother's Day and Father's Day.  And called for the age of consent for sex be lowered to 12.  She called for the elimination of referring to men as bread-winners, and women as home-makers, and called for a comprehensive governmentally supported program of child care.

She took her radicalism into the realm of language, saying all terms referring to sex differences be struck from the laws: words like mankind, serviceman, father, mother, brother, and sister.  Also all personal pronouns be struck like his, hers, etc.  This is always a sign of radicalism: the desire to control thinking through the control of language. She should know the 1st amendment leaves language free, as ideas are free.

And she not only advocated unilateral abortion according to a women's wishes, but also that women should not have to pay for it - advocating instead they should have a Constitutional right to a government funded abortion.

Ginsburg lived her whole life immersed in the Jewish culture: so that is also a women's right- the choice of an ethnocentric life if one chooses.  It could be the case Ginsburg presented the Jewish "Wall St. view on what the general culture should adopt in changing American roles for women, rather than her own views.  After all she wore her hair long, and also wore dresses.

Clinton nominated her because she agreed to uphold Clinton's sense of Privacy Rights.  No one can recall a time she raised this concern in any way that was universally adopted.  She had no apology, and raised no concern about privacy losses in our electronic age.  Like views on women, the prevalent culture has the final say about what it adopts and accepts.

Remember goys:  "All sex is rape, unless a man can prove a woman gave her sober consent.

Posted by Stoic Person at 1:23 AM No comments:

What if P. Trump loses?

WE all know that the system is  arrayed, so that P. Trump is the only legitimate winner.  He is for law and order.  The other side is saying they are for rioting in the streets and the defunding of the police.  No doubt a sensible public has to vote Republican to avoid the crazies.  I am seeing 10 Trump signs for every Biden sign.  The sensible seem to be aroused.  But what if the election results show the Democrats won??  What then?

Well, first I would say whomever wanted to throw our Republic into a mess would have accomplished that task.  Secondly, it is always possible for the electorate to go crazy, and vote entirely irresponsibly.  What then?  If not that, then it is also possibly that vote tampering resulted in a crazy winner. Either way, should the president relinquish power?

The question is: "If the government finally makes the public crazy, what then?"  They might vote any which way, and basically against central authority.   Couldn't that be legitimate?  There are two basic problems with this.  One, it was not the authority in the government that caused the unrest and craziness, it was endemic in the population that included many foreign people, and brought to fruition by Corona virus and influences from outside the country.  Clearly, for this P. Trump is the answer people hope for, not the cause of the problem.

So regardless of the vote, P. Trump is the man who can lick our problems.  Whatever it takes, P. Trump we are behind you, and if the crazies tamper with the vote, well the answer is still the same.  Maybe you can fix their vaccines so they cannot reproduce and become docile, here on this side of the border, or over there.  Or if you arrest them, give them a "distemper" shot. Then we hope he goes after the people who created this mess.  I wonder if he would do that?

Posted by Stoic Person at 12:00 AM No comments:

The Swamp is still breathing

One must wonder why congressional incumbents are constantly reelected, right?  Right now, as I speak, the airlines have been hurt by Corona virus, and Congress is bailing them out.  Aren't they supposed to know there are no borders?  How long does it take for a jet plane to go to Beijing to collect their monetary losses?  I mean, the US can go broke paying for intrinsic US domestic problems, and then paying for all foreign countries and what they do to us, like destroy one of our companies because of espionage or whatever, and again our government pays.  They let them in here, let them do the espionage and damage, and then pay for the damage.  This probably is destroying our economy, right?
The falling out with Congress began with the outsourcing of our jobs.  Congressional approval fell to 5%.  They imposed the TSA and said America consisted of indigenous terrorists, and anti-government militias.  They strongly put down political counters in the form of the Tea Party.  We are still fighting this same fight.  The airports still have TSA agents, and the public just goes along even though this is all based on US citizens being terrorists.  The people who placed the TSA into airports are now the anti-Trumpers.  How many domestic terrorists have they arrested?  Doesn't Nancy fly on her own plane anyway?
Nancy is a problem.  She is a bat crazy carpetbagger, but keeps getting re-elected because of a single issue:  homosexuality.  She gives these constituents national concession of this issue, and in return they keep electing her, and then she screws up the remainder of the country with all her other gambits that have little to do with the district she represents.  Nancy's corrupt policies are destroying the country, but she stays around.  There are several like her.  They shut down the national ethical system, Congressional and judicial oversight, have usurped our privacy,  and blamed us.  No wonder they have interfered with access to our bullets.
Speaking of which, where are our bullets?  WE have a 2nd amendment, and no bullets.  This is another move by the government to assess us as the terrorists, and as a result they have crippled the 2nd amendment.  Why can't we go to a bank, get a loan, and start producing bullets?  The only problem is that its not happening.  How can we protect our property and persons without police and bullets?   Instead we are more likely to have our names placed on a blacklist for suggesting we ought to have bullets.  Our government should help us start the production of bullets so we do not depend on Mexico for them, and then protect these businesses from foreign dumping.
Posted by Stoic Person at 7:31 PM No comments: